It all started with a lively conversation on politics between India and Pakistan: a subject that is obviously still sensitive, 60 years after the Partition. This was the first time we managed to have a deep conversation with a local. Due to either the language barrier (though I can speak a bit of Hindi) or because we are backpackers and locals see us as giant walking wallets, conversations are usually quite limited. So we valued this precious exchange with Ragu, who was born in a village between the Pakistani border and Jaisalmer, the Golden city, which is the last town before the border.  He told us that his family was separated during the Partition and that his aunt remained on the other side, in what is now Pakistan. She did not realize she could never come back. Anyways, we agreed to follow Ragu on a tour to spend a night in the Thar desert.

The next day we met him at the parking lot at the entrance of the Golden Fort. We squeezed at the back of a Jeep with a group of Israeli tourists. The boys were tall and were banging their heads in the ceiling of the vehicle.  Two girls were sharing the passenger’s seat – which made our driver super happy – and decided to hold the stereo hostage.  So basically, we were in the middle of nowhere, driving towards the desert, in an “international nightclub”-like atmosphere singing out loud to Ed Sheeran’s Shape of You.  The weather was hot and dry and the driver was trying to impress the girls by opening the front windshield.

We stopped at an oasis. I know it sounds nice but the truth is it was just a huge puddle of water where we could take pictures for our Instagram profiles! Then they drove us to a fake – supposedly haunted – old village. There weren’t any historical ruins, just a village that was being renovated, nothing cultural or innovative really. We had opted for the non-touristy desert safari, the option that seemed the most authentic … We started to worry about the night in the desert. The tour seemed long since there was nothing to see. It was almost funny, at least the Indians had a lot of fun fooling their daily group of tourists.

We climbed back into the Jeep and drove to a place with three houses, children and camels.  This is where the Jeep trip ended for the Princess and the Backpacker and another one began. Karan Singh, owner and breeder of camels since several generations, gave us a few instructions and let us sit on the back of Pappu and Raju, two camels brothers. A camel ride is an interesting and equally terrifying experience, especially when the camel goes down the hill and it feels like you are going to fall! It is a funny and uncomfortable experience, I think I even managed to bruise my sit bones!  Camels were eating leaves and bushes every time they could and were told off by their master. Karan Singh seemed very attached to his camels and treated them well, like he would treat his own children. We reached the night camp at sunset. The light was beautiful and it felt relaxing to be in a natural place where we could see less of the man’s crazy intrusion into nature.

We joined the group of Israelis people. There was also an American girl who was totally flirting with her guide. He even took her to his village and introduced her to his family, they must have been happy to meet such an exotic blonde girl with long hair, you do not meet them so often in the Thar desert.

Snacks were served, the chai was super good. We also had potatoes and onions pakorey and multicolored industrial chips, taste bad but look cute. We improvised a “make-your-chapati-in-the-sand” workshop. Needless to say no one washed their hands, neither before, during or after. A small group gathered around the fire and started rolling small balls of dough (water and flour (atta)).  We did our very best to make them as round and flat as possible without any utensil.  The cook was making fun of us and cooked our artistic creations in the fire.  I ended succeeding in making round chapatis and I have to say I was pretty proud of myself eventhough there I left bit of sand, for the crunchy effect!

We gathered around the campfire to eat, sitting in the sand. In the desert one goes back to what is essential: the elements, air, earth, water and fire and the connection nature. Our guides know the desert by heart, they know which insects roam at what time of the year and what animals we can meet in the evening if we move away from the camp. They are very resourceful men, they know how to handle the logistics, security and food in the desert and most importantly they know that in the desert they can only rely on themselves. The first village is located miles away and let’s not even talk about the closest medical facilities. It is in these moments that we come across people whom we would have never met in the “real world”.  We discover other ways of living, we learn from each other and it is just beautiful.

The Israelis told us that they had just finished the compulsory national military service. Some of them were in the army while others worked for the intelligence services. Compared to what they had just experienced, traveling in India was super relaxing! It is common for Israelis to go on long trips to India after their 2-4 years of compulsory military service. They all travel to the same places like Jaisalmer, Udaipur, Pushkar and Rishikesh for example. They party a lot and like to try extreme sports. They sometimes visit tea plantations (or opium ones, actually mostly opium and cannabis).  Some in our group had brought beer and snacks and kindly shared them with everyone. One of them offered our guide some peanuts. He very politely refused. He said he is sorry but he does not take drugs! We laughed so much about those supposed Happy Peanuts! Apparently, for Indian people, Israelis have a reputation of offering space peanuts!

In our very international group we started talking about things back home. We ask the American girl what she thought of her new president and we also got Israeli people’s opinion on trump, which was interesting. In our group different people from the same country had very different opinions. A good reminder that you cannot generalize a country’s opinion.  One of the girls was a singer and with her guitar player boyfriend she offered us a couple of songs in Hebrew. She had a really beautiful voice and I noticed that our Indians guides and camel breeders were touched. Music really is universal and has a true unifying power. Karan, the master of the camels, the Maharaja of the desert, was drinking his Coca Cola in an inox glass washed by the sand (yes the sand is clean (or so we were told) and  at least you will not waste water (first, find water in the desert anyways). 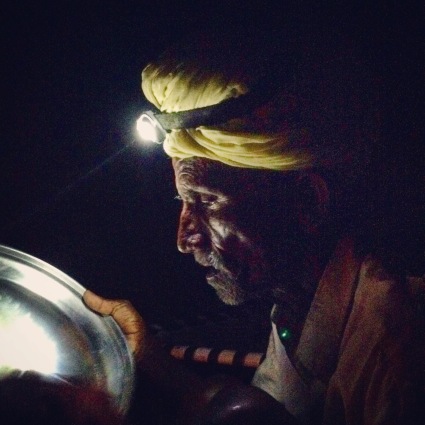 Master of the Camels
He told us about his life in the village where he returns as soon as the weather gets too hot and the tourists stop coming. He never got married and has no children. Usually in his village, girls get married around 18 and boys around 21.  Our guide from the hotel talked a lot with us, which was pleasantly surprising. He managed to communicate very well in English considering he doesn’t know how to read or write, neither in English  nor in his native languages. He has never been to school but he finds but he is very motivated by speaking with tourists. He feels as if he was traveling. This young man who is not scared of facing danger in the desert has not yet had the courage to go visit the Taj Mahal in his own country. It has been his dream and he talks about it every year with his friends. We were touched by his story, realizing how lucky we were to move around so easily (even when we found it difficult), we also wished we could take him there.

When I went to bed I lost a transparent object in the dark, and an Indian managed to find it. We told you, in the desert, everything is possible! The backpacker and I were the only ones without the “bed” option, we slept in sleeping bags in the sand with beetles as pets. Karan said not to worry, that beetles are “very  friendly”. I know that wouldn’t have been enough for my insect-phobic sister! Within very few minutes, silence owned the night. “We could hear a fly fly” as we say in French and to tell the truth I heard an ant sneak into my bag to eat my propolis tablets for sore throat! It is also on the packaging of these tablets that I took my notes during this fabulous night in the desert.

It was moonless night. Until it showed up at a disconcerting time. I had never seen that so  precisely before, the moon  eclipsing the stars.  We noticed that constellations were “upside down”. We are just so used to seeing them from our native European point of view. This show was fascinating and I slept with my glasses just to make sure I could see it as long as possible.
The sun was rising on the sand dunes and on our little group.  After breakfast and a hot & sweet chai we took Jeep and camels to return to the Golden Fort of Jaisalmer. We turned the volume even louder in the Jeep and sang stupid songs together, we felt connected by feelings of happiness and luck. I am grateful I had to live this experience and I will always remember making chapatis in the sand, dining around the campfire, the space peanuts, Hebrew songs and this beautiful night I spent, looking at the stars in the Thar desert.